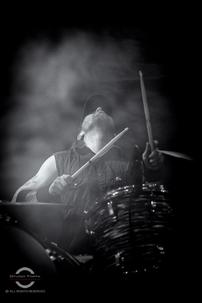 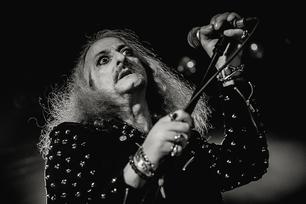 Pentagram was initially formed in 1971 by Bobby Liebling (vocals) and Geof O'Keefe (drums) with Vincent McAllister
on guitar and Greg Mayne on bass. After recording several demos throughout the mid-70’s, this line-up lasted until
1976. Much of the material that would be released decades later as "First Daze Here" was recorded by this original
incarnation of the band.

Pentagram would then lay dormant until Liebling connected with Joe Hasselvander in 1978. Hasselvander was
playing in a singer-less group consisting of himself (drums), Richard Kueht (guitar), Paul Trowbridge (guitar), and
Marty Swaney (bass). Liebling soon joined and the group took on the Pentagram moniker as they began performing
Liebling's material from the previous Pentagram line-up. After playing several shows and releasing a 7" single in
1979, personal differences consumed this line-up by the end of that same year.

In 1980, guitarist Victor Griffin and bassist Lee Abney had formed a band called Death Row in Morristown, TN. Griffin
then met Hasselvander and relocated Death Row to the northern Virginia area and began playing together. After the
trio began rehearsals without a singer, Hasselvander introduced Griffin to Liebling. After only one jam session
together, Liebling joined as vocalist for Death Row. Former Pentagram member Martin Swaney soon replaced Lee
Abney on bass and the classic Death Row line up was forged. Following demos recorded in 1982 and 1983,
Hasselvander left the band, Stuart Rose was chosen as his replacement, and the band changed their name to
Pentagram. Subsequently, the 82/83 Death Row demos, which had been packaged together under the title "All Your
Sins," was then released as the first official Pentagram album in 1985... The debut was simply titled "Pentagram."

After recording their second album, "Day Of Reckoning" in 1987, the band folded yet again in 1988 when Griffin left
for other opportunities on the west coast. In 1989, Greg Mayne (bass) returned and Randy Palmer (guitar) joined
Liebling with the addition of Ted Feldman on guitar and Jon Cook on drums. The band was working towards
recording a third album, but shortly after their first live performance, they imploded yet again.

In 1993, the "Death Row" line-up of Bobby, Victor, Joe, and Marty reformed when Peaceville Records reissued the
first two albums. With additional Peaceville support, they went on to release their third full-length album, "Be
Forewarned" in 1994. Later that same year, Joe and Marty departed once again and in stepped Greg Turley on bass
guitar and Gary Isom on drums. This line-up lasted until early ’97 when internal pressures and differences arose and
the band went their separate ways.

1999 saw Pentagram re-emerge once again in name only as a duo consisting of Liebling and Hasselvander. The pair
recorded both 1999's "Review Your Choices" and 2001's "Sub-Basement" on Black Widow Records, but a live
version of the band never solidified and, once again, Pentagram's future was in question.

In 2004, Liebling recruited guitarist Kelly Carmichael, bassist Adam Heinzmann, and drummer Mike Smail, all
members of Frederick, Maryland based doom act Internal Void. The new lineup recorded the "Show em How" album
but, as history recounts, this line-up couldn’t survive the ongoing turmoil within Liebling’s life and split soon after the
release of the new album.

In August of 2008, a new Pentagram lineup was announced which featured Liebling being joined by Russ Strahan on
guitar, Gary Isom, who had played with the band in the mid-90s, returning on drums, and Mark Ammen on bass.
After a relatively successful string of shows over the next year and a half, Russ Strahan abruptly left the band in
March of 2010.

Just prior to the start of a tour in May of 2010, Pentagram unexpectedly announced the return of guitarist Victor
Griffin and bassist Greg Turley as touring members while Griffin's Place of Skulls project was on hiatus. After an
overwhelmingly positive reaction by fans and several successful appearances, Griffin and Turley rejoined as
permanent members of Pentagram and, in November, signed a three album deal with legendary Los Angeles label
Metal Blade Records. With drummer Gary Isom unavailable to attend recording sessions, the band enlisted Place of
Skulls drummer Tim Tomaselli and began work on the first Pentagram album in seven years, Last Rites. Shortly after
the release of the album, Metal Blade followed up by offering "When the Screams Come," a live DVD documenting
the band's 2010 Maryland Deathfest appearance and featuring the Liebling, Griffin, Turley, and Isom line-up.

With the April 2011 release of Last Rites, the band showcased the new album as well as their classic tracks at the
South by Southwest festival (SXSW), followed by a European tour which kicked off with a long awaited appearance
at the venerable Roadburn festival in the Netherlands. Pentagram continued touring in Europe and the US
throughout the remainder of 2011, including the band's first-ever appearances in the UK in its 40 year history.

With Last Rites studio and tour drummer Tomaselli involved in other commitments, coupled with the band's desire to
continue touring into 2012, Pentagram began the search for a permanent drummer and brought in longtime
Pentagram fan Sean Saley, best known for a stint with legendary DC punk band Government Issue.
The band continued to tour in the US, UK, and Europe over the remainder of 2012, playing bigger shows and several
major festivals, including Hellfest and Sweden Rock. Around the same time, a documentary film on Bobby Liebling's
life and the history of Pentagram, titled "Last Days Here," was released in theaters, on DVD, and eventually through
Showtime and Netflix, gaining Pentagram legions of new fans and bringing the band around the world, giving the
chance to many longtime fans to see the band in person for the first time.

By late in 2012, and with Place of Skulls idle, Victor Griffin had written and recorded several songs for a new project
called In-Graved. He announced he would leave Pentagram at the end of the year in order to finish the In-Graved
album and tour behind it. The split was amicable and Griffin and the band agreed that they would likely work
together again. Pentagram hired Matt Goldsborough to play guitar in Victor's absence and continued touring
throughout 2013. Matt's playing style and tone recalled that of early Pentagram guitarist Vincent McAllister and, as a
nod to that era of Pentagram, the band added a few of the 70s-era songs it had not performed live in decades,
including the first-ever live performances of the song "Be Forewarned" in the band's history.

In January 2014, Pentagram again surprised fans by simultaneously announcing the return of Victor Griffin to the band for a year of touring and writing material for a new album. ​In early 2015, Pete Campbell replaced Sean Saley on drums and Pentagram began work on the its eighth studio release. "Curious Volume" is all things Pentagram past and present. The album was released on Aug. 21, 2015 and plans are currently in the works for 2015/2016 world tours. 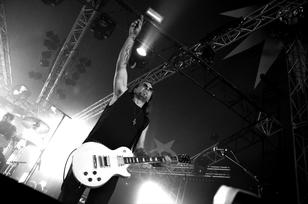 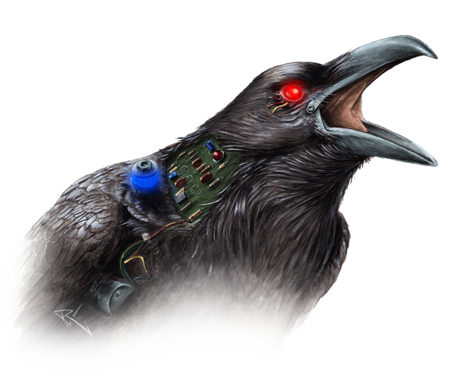 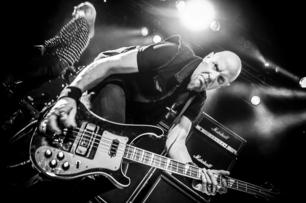